This article, by Mirella Machancoses López, was originally published on the La Mirada de Gorgona blog.

More or less a month ago, The Game Kitchen (a London-based group of larp creators who join once a month for creating short larps together and play test them) received a mail from the Victoria&Albert Museum for doing a larp in their November open night. This night was called “Friday Late: parallel worlds“.

For me, the opportunity of running a larp in an important museum as V&A was a dream become true. I think larp should have an important role inside future museums, not only as an educational tool but also as a piece of art (as performances are). For me, being part of these is the first step of that path.

Regrettably, November wasn’t a very good month for me to be an active part in the creative process. I had a huge amount of work and a vacation planned to attend to Black Friday larp. Even though, I decided to join the group and be part of the team who ran the larp last Friday.

Finally, there were two spaces in which people of The Game Kitchen were running two different larps. The first was “Beholder Controller” of Adam James. It sounds really exciting but I couldn’t attend (they were both projects simultaneously). The second one was an adaptation of “Fallen Stars” of Larps from the Factory called “In Storage”.

Discussing in the group which game would be nice to perform in the museum, one of the first ideas was doing an adaptation of “Fallen Stars” by Martin Nielsen  and Magnar Grønvik Müller. Playing with old objects was a suitable idea for an environment as rich as the V&A in those things. The authors were contacted and the gave their permission for it.

Main adaptation of the larp was made by Kate Bennett, and written down by Michael Such an Mo Holkar (thank a lot! great job!). The idea was running short (30-40 min) larps with around 10 players in each of them. It was a really interesting so we can manage to run them though the evening and nearly 50 people could enjoy it.

In Storage is about a group of objects all part of the same exhibition at a museum. As in “Fallen Stars”, the objects could walk and talk when there are no humans around. The exhibition has come to an end and the objects were in storage as the museum decides what to do next: permanent exhibition or thrown into a vault.

Participants had 10 minutes, before the larp started, to find an object in the museum. They should make a photo of it and come back. They will play this object. After that, we had ten-fifteen minutes of workshop (warm-up and character building) and another fifteen minutes of play. I hope the authors decided to make public the adaptation as I think it’s really a good job for bring closer larp and museum.

Running the larp in a museum room has its problems. We should be extra-careful with the people playing, as they shouldn’t damage any of the pictures exposed there. That limited a lot the physical actions, but the background was so nice to play in. In addition, we only had one room, so workshops were being run in one part of the room at the same time that people played in other corner and other visitors come through it. It wasn’t the ideal venue but it was worthwhile. 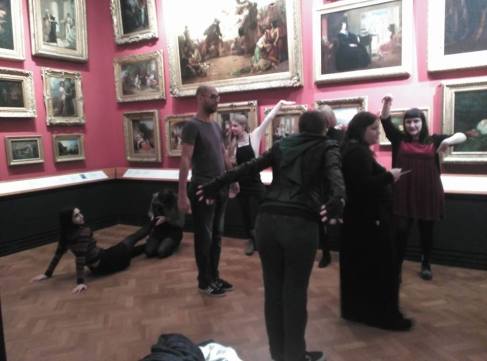 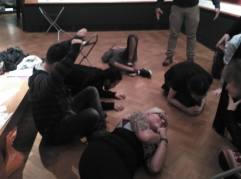 I was part of the team that ran the workshops, and it was an amazing experience. Running workshops for not larpers was really interesting, as you should focus in some aspects that you normally don’t do: how to role-play a character, breaking ice and encourage them to play…

I’m really glad that The Game Kitchen gave me the opportunity to be there. I think people had a really good time playing it and I hope some of them will play another larp in the future. We’re living interesting times for our hobby, and I hope to be here to see the transformation from an outcast activity to a well-known and accepted one. We’re near it!